Everyone knows of someone, whether it be a friend or family member, who has experienced problems as a result of heroin. It affects everybody, one way or another.

The City of Harrison and our surrounding communities are unfortunately not immune to the increasing “opiate epidemic.”

Unintentional drug poisoning has become the leading cause of injury death in Ohio, since 2007, surpassing motor vehicle crashes. Fatal overdoses, especially from non-medical use of prescription drugs, has surged over the past decade. Ohio's death rate, due to these prescription drug overdoses, has increased 366% since 2000. In Ohio, there were 411 fatal unintentional drug overdoses in 2000 growing to 1,914 deaths in 2012. An average of five people each day die due to drug overdoses in Ohio (Ohio Department of Health).

Reports are naming fentanyl the new silent killer, addictive and lethal, stalking Ohioans and killing them in massive numbers. Fentanyl, a synthetic, highly addictive opiate 50 times more potent than heroin, is contributing to yet another record year for drug deaths. 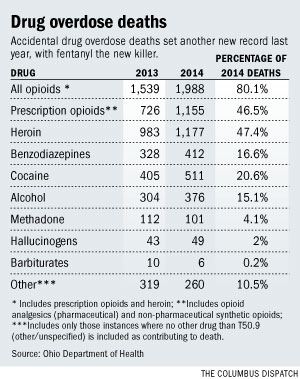 
There is no such thing as a safe dose of heroin. Heroin is an opioid; opioids are very habit forming and dangerous, but not everyone who uses heroin is addicted.

Heroin Abuse ​is any use of heroin. In the United States, heroin is never prescribed but very similar drugs are. These are just as dangerous. Even a little abuse can lead to addiction. Snorting, eating or smoking heroin or painkillers is just as habit forming as 'shooting up.'

Heroin addiction is a disease. Addiction to heroin creates chemical and molecular changes in the brain, altering its functioning and affecting the addict's mood,  behavior and thoughts. Addiction is physical. The brain and body depend upon heroin for chemicals that it once manufactured for itself. The term heroin dependency reflects those changes and withdrawal symptoms of heroin cessation. Addiction is not a reflection on the addict. Anyone can become addicted to heroin.

Admitting​ to oneself, "I am an addict," is often the hardest part of recovery. It is also the crucial first step. One symptom of addiction is the belief that one is not addicted. As some twelve-step programs instruct: "I have a disease that tells me that I do not have a disease."

While​ there is no single definition of recovery, a good working definition ismaintaining sobriety, eliminating withdrawal symptoms and minimizing cravings. Treatments will focus on those goals. It is very important to note that very few heroin users quit on the first try - relapses are the rule, not the exception so do not lose heart!